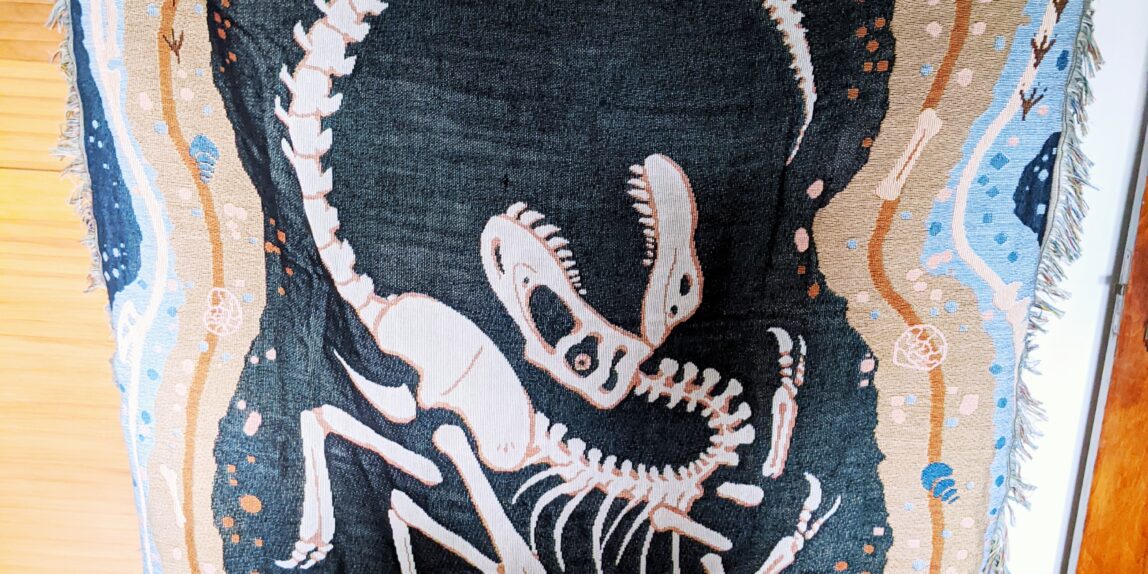 Wow, how is it the middle of August already!? Turns out July ended up being just really busy for us, and we totally missed making a newsletter for it. So we’ll be combining it with the August one for now! We have some interesting announcements for this one: some good, some bad.

We also had our first table in over a year last week, at Montreal Pride! We’re hoping cons will come back (as safely as they can) soon. But that was probably what made us lose track of time, because it’s been so long since we prepared for one!

Alright, let’s dive in to some of the things going on with us right now:

Prism Knights is still underway, currently Juniper (the green title) has finished being written. That just leaves Lamplight (yellow), left. Is that all? Well, Coquelicot and Bronze are still in the final editing stages, and Juniper is in the hands of the editors now. We also have some WIPs for Juniper’s cover (done by the lovely Jeff Johnson). Here’s a preview! 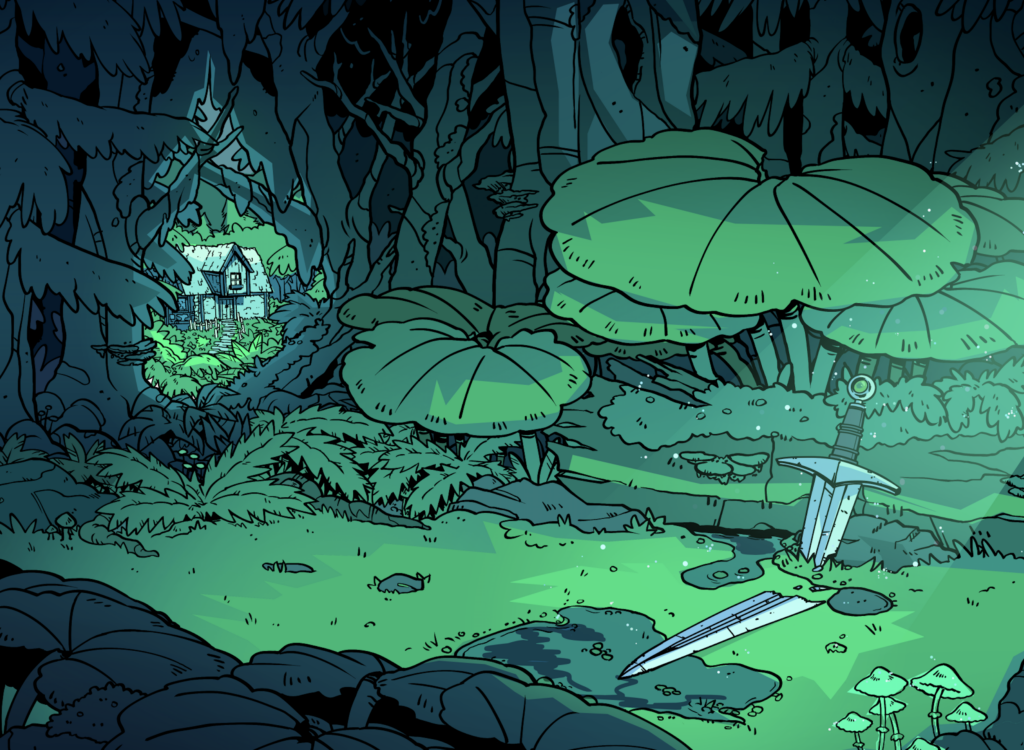 Basically, it is slowly trucking along. We’ve sent in Sapphire and Velvet to our printer to start the estimates, and it’s looking like those we won’t be getting until later this year. Printers are quite backed up right now! Which we’ll go into more detail about next…

So, this is where the bad news comes in, and is it any surprise it’s SanCirc, which just seems to be where all the struggles are lately. In the last several newsletters, we had been promising the Kickstarter for Sanity Circus Volume 2 to be at the end of the summer this year (in fact, it was originally supposed to be last year.) Unfortunately, there will not be a SanCirc Kickstarter this year.

There’s a couple reasons, but the main one right now is that printing prices have currently increased. The original plan to print two, full colour, 300 page comics would skyrocket the Kickstarter goal, and coming right off of a hiatus, we aren’t confident with that. After speaking with the lovely folks at Hiveworks, we decided it was best to postpone the Kickstarter again, to wait and see if printing prices will drop.

We of course do have a plan going forward: right now, we’re aiming for a smaller, Volume 1 reprint Kickstarter next year in May. After that will be a new SanCirc Kickstarter every year, with Volume 2 in May 2023, and (a hopefully finished by then) Volume 3 in May 2024. This is of course subject to change, but there’s a good chance we’re going to be running separate Kickstarters for each volume, to break down the costs better. This isn’t the most ideal, and it pains us to have to postpone this Kickstarter again, but as it stands now we just don’t think we can take the risk of running it this year. (We are still going to have a Kickstarter at the end of the month, though… more on that later).

In good news though, Chapter 21 of SanCirc has started, and that will probably start happening at the end of the month/September! Yes, the comic is coming back, we promise! A big thanks to J for aiding in this endeavor and lending their lovely inking skills to speed up the process. Here’s a little preview:

Phew, okay, that was long. It sucks, but we hope you’ll understand, and we’ll of course keep you all updated on the Volume 1 reprint.

We don’t have too much new in the shop this month, as we focus on the next incoming Kickstarter (more on that below). But! We did get the Sapphic and Achillean pins in hand. 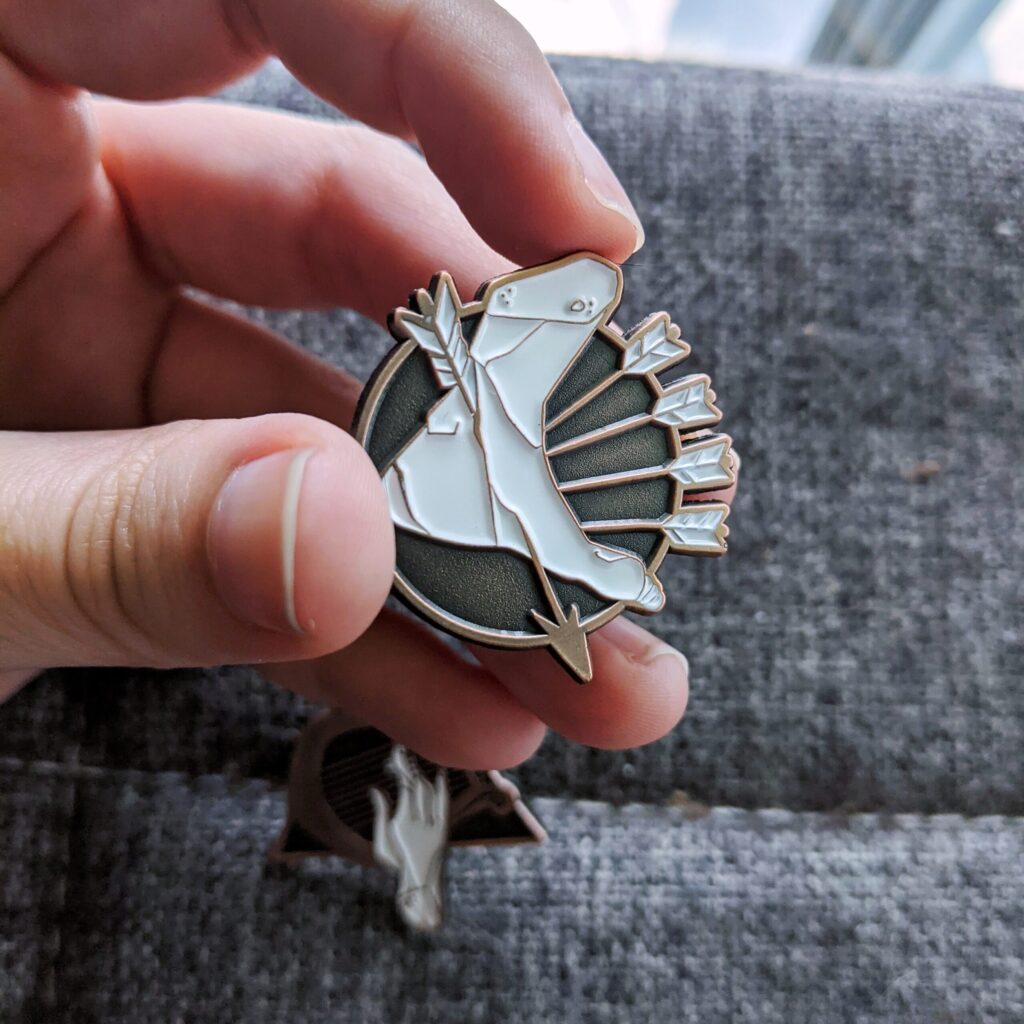 It’s our first time going with antique metal, and we’re so happy with them. As stated before, proceeds from either of these pins bought will go towards a local LGBT+ charity. They also come in special little labeled bags, too.

Finally, as mentioned above, in the absence of the SanCirc Kickstarter, we opted to run another one during its slot. This one is much smaller, but for an item we’ve always wanted to try out, and are excited with the results:

Tas did the design, and we recently got a hold of the prototype and we couldn’t be happier with the result. We will be launching the Kickstarter to officially print these blankets on August 31st. There will be a discounted earlybird tier for the first few days, and it will also include plenty of our prehistoric merch to go along with it.

You can sign up to be notified when it launches here.

We will also be sure to notify via email when it launches, too.

That’s all our big plans for now. Hope you are all doing well, and please get vaccinated (if you can).